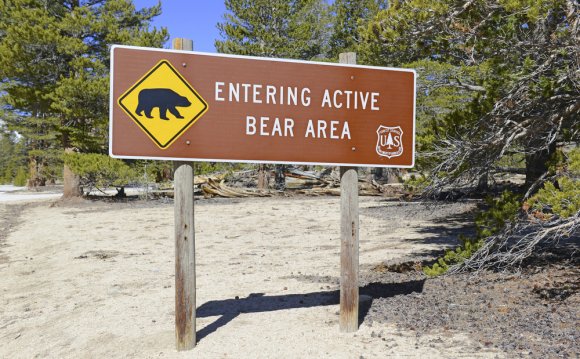 In 2006, it was estimated that 1, 500 black bears live in the national park, which is equilivant to two bears per square mile. Years ago the black bear stretched across most of North America except the extreme west but loss of habitat has kept the black bear in the thick brush and dense forest.

Black bears may be brown, black, or cinnamon, however, in The Great Smoky Mountains National Park all black bears are black. They can grow to six feet long and three feet tall, at the shoulders. A male black bear will weigh approcimately 250 pounds during the summer months and the smaller females weigh a little over 100. But the bears will double their weight by fall in preparation of the cold winter, and there are records of black bears weighing up to 600 pounds in the national park. If kept to their natural diet, which consists 85% of berries and nuts and the rest insects and animal carrion, a wild black bear can live between 12-15 years. But if they have access to human food and garbage, they are expected to live only half that time.

Black bears will most likely be seen early morning or late evening in the Spring and Summer seasons. July is mating season for black bears and both the male and females may take more than one mate during this time.

When winter approaches, bears will choose a den, usually a stump or hollowed tree, high above the ground. During their winter sleep, which is not a true hibernation, one to four cubs will be born, most often in the month of January. The cubs weigh eight ounces at birth and will remain with the mother for eighteen months.

Attacks on humans by black bear are very rare, but they do occur. As black bear are wild and unpredictable animals, they should be treated with extreme caution.

If a black bear is spotted keep your eye on it, but DO NOT approach. If the bear changes its behavior, such as it stops eating, starts watching you, or changes its direction, you are too close, and this can cause the bear to become aggressive. Don’t run away, but back away slowly and increase the distance between you and the bear.

If you cannot increase the distance and the bear follows you continually without paw swiping, change your direction. If the bear continues, stop and stand your ground. If he continues try shouting or talking loudly in order to intimidate the bear with aggresive actions. If you have other people with you, it is best to act as a group and make yourselves look as large as possible. Throw a rock or other non-food objects at the bear or find a thick stick. DO NOT turn and run away from the bear or leave food, this can cause further problems.

If the bear seems more interested in your food and you are attacked physically, seperate yourself from your food as most bear attacks are attempts to get human food.

If the bear is more interested in you than the food and you are attacked, fight back fiercly with any available object as the may consider you as his prey. Report all incidents to a park ranger in order to help protect others – But above all, keep away from bears.

The black bear has an acute sense of smell, which will lead it to its natural ffod of nuts and berries, but a bear can also be tempted by human food and garbage left out in the open or offered from a human. DO NOT FEED THE BEARS!! This can lead to many problems such as:

These reasons cause the National Park Rangers to issue tickets for feeding bears and not storing your food correctly. These tickets can result in fines of up to $5, 000 and jail sentencing of six months.