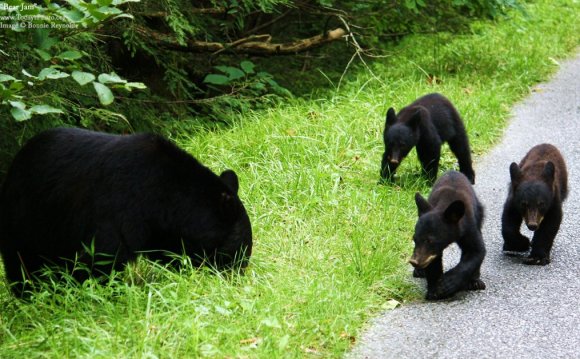 1. Don’t approach the animals too closely!

When visiting Cades Cove, as well as other parts of the Great Smoky Mountains National Park, be sure not to approach any of the wildlife too closely. National park officials prohibit crowding, harassing and feeding wildlife in any part of the park.

They do this to preserve a safe environment for the animals in the Smoky mountains as well as the visitors to the park.

As a rule of thumb, if your presence in Cades Cove is altering an animals behavior, you are too close to that animal.

2. Remember the animals in the Smoky Mountains aren’t pets!

The animals are absolutely beautiful, but they are wild and only come out of their hiding places when they are hungry. Though the black bears in the Smoky Mountains may appear cute and cuddly, even friendly at times, they really appreciate having their own space away from human interaction. So be sure to keep your space because these animals aren’t household pets.

3. One of the best places to view the black bears is Cades Cove!

There is approximately one bear per square mile in the Great Smoky Mountain National Park, but your best chance to see the black bears are at Cades Cove. The reason for this is somewhat of a mystery except for the fact that bears are not interested in being seen by humans. Another reason might be that bears spend much of their time in trees where people rarely look for them. Dens are often located about 20 feet up the trunk of large trees. Here, the Smoky Mountain black bears sleep through much of the winter, the females giving birth to her cubs even before she shakes off her sleepiness in the spring. Smoky Mountain black bear cubs weigh only 7-8 ounces as newborns. The mother bear will leave her cubs to search for food for short periods of time and eventually will bring her cubs, teaching them the resources for food and water that can be found throughout the park.