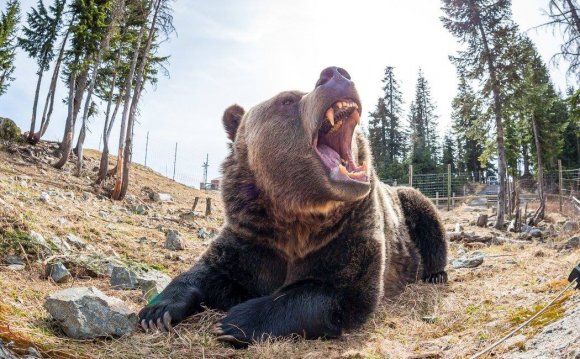 Today, April 16th, 2014, Grinder and Coola emerged from their bear den and into their hibernation habitat for the first time this year. Their 13th hibernation period has come to an end.

The boys have been up and active for a few days now as we put the finishing touches on their outdoor hibernation area. Today, with a few eager onlookers, we opened the door to the den and within seconds Grinder began digging at the snow in front. Coola joined him and together they made short work of the snow. With a heave, Grinder pulled himself up and out of the den, while Coola took a bit more time to finish up the hole in the snow and widen it for his larger frame. Finally he joined Grinder in exploring the great outdoors!

The hibernation period this year was 139 days, and the boys had not had a good roll in the snow and water since last fall. So after a bit of exploration, they began to rub in the snow and splash in the water. The snow did not stay white and pristine for very long - but we imagine the bears felt so much better after a good clean.

With personal hygiene off the list, it was time for a bit of play. Racing around their habitat, the bears took turns initiating short, playful, wrestling sessions. It seemed they wanted to wrestle longer but they are a bit out of shape after 5 months of mostly sleep! So for a break, they began to explore good places to dig their first snow caves of the year. We expect to see them develop over the next few days!

Since they have now emerged, guests to Grouse Mountain are welcome to come and visit Grinder and Coola in their hibernation area - just follow the signs in front of the Chalet! We hope to see you up here soon.

Grizzly bear habitat on the Grouse mountain in Vancouver ...

The Grizzly Bears of Grouse Mountain