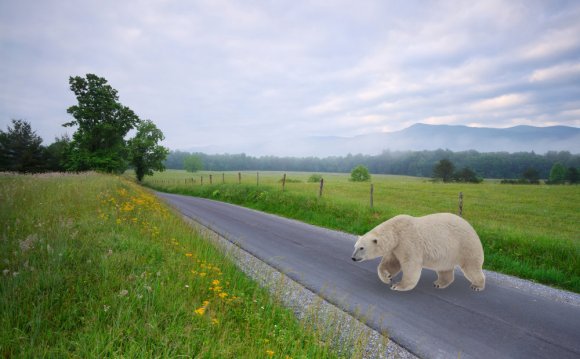 Bears in the Smokies: How to Keep Safe

The Great Smoky Mountains National Park features an amazingly diverse selection of wildlife within its beautiful natural setting. Despite being able to catch glimpses of everything from deer to elk to snakes and salamanders, though, visitors to the park tend to focus on spotting one creature in particular - the black bear.

What exactly makes these powerful yet mesmerizing animals so appealing to park visitors? Maybe it is their seemingly nonchalant movements or their resemblance to life-sized stuff animals or their sometimes playful mannerisms. Their sheer size is something behold as well. A typical male brown bear weighs approximately 250 pounds during the summer months, while females generally weigh slightly over 100 pounds. Bears may double their weight in the fall, however, and bears weighing over 600 pounds have actually been documented in the park.

While black bears may seem from a distance to be the be the perfect type of wildlife to have an up-close Smoky Mountain encounter with, however, they can, in fact, prove to be quite dangerous to humans. Attacks on humans are extremely rare, as evidenced by a recent study published in the Journal of Wildlife Management which found only 63 people have been killed by black bears in the United States and Canada over the last 109 years. Seventeen of those deaths, however, have come since 2000, which leads the study's lead author, Dr. Stephen Herrero, professor emeritus at the University of Calgary, to conclude the increase in fatalities has less to do with aggressive behavior on the part of bears and more to do with humans attempting to approach the animals on a larger scale.

"It's not an increase in hungry bears, " said Dr. Herrero. "It's simply more and more people out there interacting with bears."

Bears actually inhabit all elevations of the Great Smoky Mountains National Park. Biologists estimate that approximately 1, 500 bears live in the park, which equals a population density of roughly two bears per square mile. With such a high population, there is at least some chance a visitor to the park could experience a face-to-face encounter with a bear.

The threat a black bear can pose does not necessarily mean, however, that they should be avoided altogether, as the Great Smoky Mountains National Park offers its visitors plenty of opportunities to observe these fascinating animals in their natural habitat. By keeping a few simple safety rules in mind, park visitors can help keep their bear-viewing experience a safe and happy one.

The two areas visitors to the Great Smoky Mountains National Park should be most concerned with concerning encounters with bears are along the trail and in camp. Obviously, these more exposed, outdoor areas lend themselves to better wildlife viewing, but they also can place visitors in an environment with less physical protection. Even though the American Bear Association estimates that a person is 180 times more likely to be killed by a bee and 160, 000 times more likely to die in a car accident than to be attacked by a bear, the potential for injury still exists.

What to do if you encounter a bear...

Should you encounter a bear on one of the park's many trails, remain watchful and do not approach it. A good indicator of whether you're too close to a bear is if your presence causes it to change its behavior. For instance, if the bear stops feeding, changes its travel direction, or pauses to watch you, you're too close. This can lead to the bear displaying aggressive behavior, such as running toward you, making loud noises, or swatting the ground, in an attempt to make more space for itself. While you should do your best to oblige its wishes, you should do so slowly.

Never attempt to run away from a bear, as they can travel at speeds of up to 30 miles per hour. It is better to slowly back away, keeping your eyes on the bear at all times. In most instances, the bear will cease its aggressive behavior and leave you alone.

If a bear continues to follow you, though, without making noise or swatting its paws, changing direction can sometimes cause it to stop. If this course of action on your part does not work, you'll have to stand your ground. Sometimes aggressive behavior, such as talking loudly or shouting, on the part of humans can actually intimidate bears. If possible, move to higher ground to make yourself appear larger. You can even throw non-food objects such as rocks at the bear. Sometimes a stout stick can even act as a deterrent.

Whatever you choose to do to discourage the bear from his course of action, however, be sure to not use food as a deterrent. Most injuries from black bear attacks result from their attempting to get at people's food. If it appears a bear is attempting to get to your food, it is best to slowly back away and abandon it. If the bear does not appear interested in your food, it may be considering you as prey. If you are attacked physically, you'll have no choice but to aggressively fight back using any object available.

Of course, the best way to avoid a dangerous encounter with a bear in your camp is to not attract them there in the first place. Black bears possess a keen sense of smell, which can cause them to be attracted to areas with any number of odors. Food smells, in particular, attract bears, which is why National Park Rangers can issue citations of up to $5, 000 for improper food storage. Penalties can also include jail sentences of up to six months.

Illustration on how to hang your odorous supplies in the backcountry. Illustration provided by the National Park Service.

Cooking and sleeping areas in camps need to be kept separate. Tents and sleeping bags should be kept free of food odors; food, garbage, or other possible attractants such as toothpaste or soap should not be stored in them. All food and litter should be packed out of the camp. A clean campsite is essential in reducing the chances of a bear encounter.

Regulations for proper food storage include securing all food and other attractants at night or when not in use. If food storage devices are present, they need to be used. If not, all odorous items need to be stored in your pack and secured in trees. Two trees should be selected, 10-20 feet apart, with limbs at least 15 feet high. Using a rock for a weight, toss a rope over a limb on the first tree and tie one end to your pack, then repeat this process with the second tree. Then raise the pack approximately six feet off the ground with the first rope, tying the end of the rope off when you are finished. Then pull the second rope until the pack is suspended at least 10 feet off the ground. The pack must also be evenly spaced between the trees, hanging four feet or more from the nearest limb.