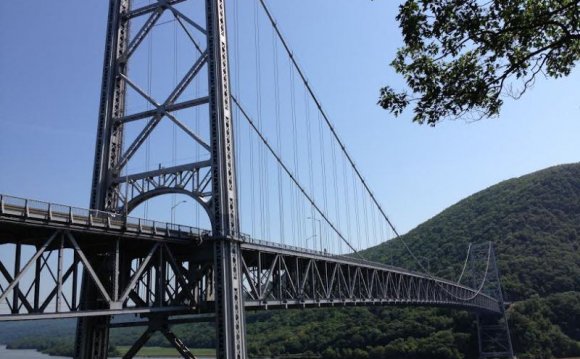 Despite living in New York City I do own a car. Actually, let me rephrase that. I pay for a car; however, because in the one month I kept it here I racked up $400 in red light camera and parking tickets I decided to store it at my parent’s house on nearby Long Island.

Recently they came to visit for the day and I asked them to leave it for me so I could use it for a few weeks and do some day trips. My first: a solo female road trip to Bear Mountain for some hiking!

There are 5, 067 acres (2, 051 hectares) in Bear Mountain State Park littered with hiking trails (not to mention picnicking, paddle boating, rowing, riding a carousel, scenic drives and trail-side museums). After parking ($8 per car) I went up to the Auxiliary Building to grab a trail map, which, to be honest, was pretty confusing — I would suggest purchasing a Harriman and Bear Mountain State Parks Trails Illustrated Map or Harriman-Bear Mountain Trails Guide if you’re really serious about doing the best trail possible.

Let me preface this by saying the night before heading to Bear Mountain — traveling solo — I (stupidly) watched the movie Zodiac.

If you have not seen it (spoiler alert!) there is a scene where a couple is having a lakeside park picnic that ends in a very painful and gory massacre by a deranged killer who has been watching them. Also, this movie is based on a true story…meaning the entire drive up I was wondering if I would even have the guts to get of my car in the wilderness where anyone (like the Zodiac killer — who is actually dead) could be watching me.

I’m also someone who jumps every time the phone rings and can’t look in a mirror once sun sets as I’m afraid of seeing Bloody Mary in my reflection.

Obviously I should not be watching scary movies.

My main objective — before poisoning my mind with horror movies — was to find a secluded trail to find inner peace and clear my head, as I’ve had a lot of stress in my life lately. I stared at the map I procured from the park, trying to find a challenging trail not many people would traverse, but unfortunately had a lot of trouble finding the starting point. So, I wandered.

There were so many scenic and quiet trails around the mountain with absolutely nobody on them. And I did go up a few of them for a bit. Ultimately, however, I decided to complete one that at least had a few people on it so that a) I would be safe from serial killers and b) someone would be able to help me if I got hurt on the trail.

I ultimately chose the Perkins Memorial Tower Trail because it promised a historic museum and the chance to summit Bear Mountain. For this I followed the white blazes to traverse along part of the famous Appalachian Trail, as six miles (10 kilometers) of it are in the park. There were quite a bit of stone steps along the way and a lot of uphill climbing, although there wasn’t any point where I felt breathless (I did work up quite a sweat, though!). A few lookout points offered a scenic break and the chance to stop for lunch, and the trail was very straightforward and clearly marked.

One of the BEST days of my life | My Trip to Bear Mountain, NY