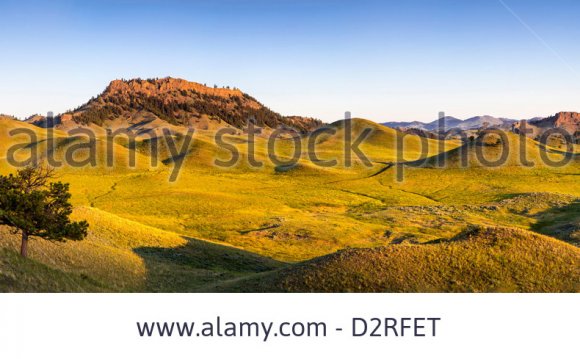 The Bear Paw’s are essentially divided into two distinct areas – east and west. The western half of the mountains is where the tallest peaks are located, with the tallest, Baldy Mountain, rising to an elevation of 6916 feet. Other peaks in the western half of the Bears Paw Mountains generally have elevations that range between 5000-6000 feet. The western Bear Paws are characterized by moderately tall mountains that are also moderately wooded, both on the mountains themselves as well as down in the valley’s below.

By contrast, the eastern Bear Paws are characterized by a mix of rolling, grassy hills with moderately tall mountains and/or buttes rising from the valley floors. The mountains in this part of the Bear Paws aren’t very high – with a maximum elevation of around 6000 feet. Additionally, since the eastern half of the Bear Paw’s receives less moisture than the western half, trees are generally confined to the peaks themselves, while the valleys below are open expanses of grass.

The Bears Paws are rarely visited by people out of state, due mainly to their out of the way location. The mountains, while visible from Highway 2, will not dazzle the passer-by, especially since the taller peaks are obscured by the smaller mountains in front. Additionally, the Bear Paws lack many of the “draws” that other mountain ranges in Montana have, such as popular and well known hiking trails or secluded, alpine lakes.

Although the mountains are not known for outdoor recreation, the Bears Paw Mountains have terrific recreation opportunities for the more adventurous. There are many hiking, horse and ATV trails in the mountains. Excellent hunting is found throughout the mountain range. Fishing is rather limited, with most of it found down in Bearpaw Reservoir, Beaver Creek and Beaver Creek Reservoir. And, surprisingly, a small ski area (Bear Paw Ski Area), is also located in...