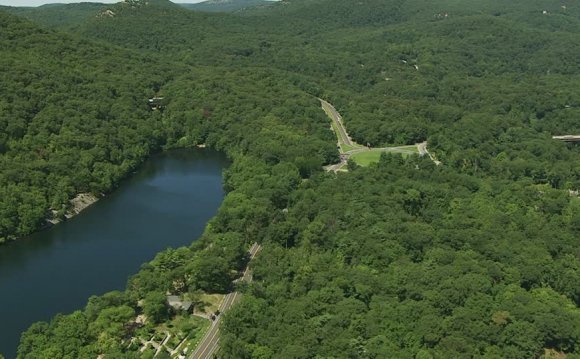 Bear Mountain State Park is perhaps the premiere attraction in the Hudson Highlands region. Bear Mountain (elev. 1301 feet) is the highest of several mountains in this preserve on the western shore of the Hudson River. Historical legend states that when viewed from the river the mountain looks like a great sleeping bear (Figure 28).

Bear Mountain is one of the most frequently visited park sites in the United States, with total numbers rivaling those of Yellowstone National Park. Like any park, however, once you get away from the overlooks and parking areas the crowds thin out drastically, and the shear size of the park provides elbow room for those willing to walk. The park is located at the terminus of the Palisades Interstate Parkway at the intersection of Route 9W and the Bear Mountain Toll Bridge. The Appalachian Trail crosses the bridge and climbs past the Bear Mountain Lodge to the summit of Bear Mountain before continuing eastward into Harriman State Park which borders the park on the east. Numerous other trails traverse the park along old abandoned mining and military roads and trails. The summit of Bear Mountain is accessible by car via Perkins Memorial Drive only during the late spring through early fall. An observation tower at the summit is open for limited hours during the day during the summer. Bear Mountain is also accessible via Metro-North to the Peekskill or Garrison stations, then by taxi across the river to the park. Food and lodging are available at the Bear Mountain Inn and Overlook Lodge: (918)786-2731.

The area has a rich history, particularly during the Revolutionary War era when the control of the Hudson River was viewed by the British as strategic to dominating the American territories. The American Industrial Revolution was supplied, in part, from local forests and iron mines, and the fisheries of the Hudson River. Resource utilization extracted a heavy toll on the region, especially lumbering and agriculture, since the poor, thin soils on hillsides were easily depleted. Local efforts to preserve the landscape failed until New York attempted to relocate Sing Sing Prison to Bear Mountain. This act precipitated the events that led to the establish Bear Mountain/Harriman State Park.

The bedrock throughout Bear Mountain State Park is the Storm King Granite (Late Proterozoic), a fairly uniform granite gneiss cut with occasional quartz-filled veins, migmitite, and pegmatite dikes. In the valleys and hillsides to the north and south of Bear Mountain are a number of iron mines which extracted magnetite ore from hornblendite gabbro veins. One sealed off mine on the military reservation north of the park reportedly reached a depth of about 6, 000 feet. The ruins of old mining roads, prospect pits, mine dumps, building foundations, and furnace ruins occur throughout the area. Sites along trails in the Bear Mountain State Park include the Doodletown Mine and the Cornell Mine (Figure 29). Samples of magnetite ore can be easily located with a magnet. In some outcrops and in old mining dumps along trails it can be quite abundant. As a consequence, you can never really trust a compass in the Highlands region!

Views from the top of the mountain are spectacular, providing vistas of the surrounding Hudson Highlands. All the surrounding mountaintops fall in the range of 1, 000-1, 200 feet, consistent with the interpretation of Schooley Peneplain. The resistant character of the Storm King Granite is responsible for Bear Mountain's slightly higher elevation. The mountaintop also provides a spectacular view of the Hudson River "fjord." Fjord is a Scandinavian term for a narrow, generally deep inlet of the sea between steep hills or cliffs carved by glaciers. The term certainly applies to the Hudson River valley in the vicinity of Bear Mountain, although the once deep water setting is now filled mostly with sediments. The river water is brackish and experiences tides typical of an estuary.

Bear Mountain Lodge is built on a flat terrace approximately 120 feet above the Hudson River. This terrace represents the level of the pre-glacial bed of the ancient Hudson River. During the glacial advances of the Pleistocene, the train of glacial ice carved the modern Hudson River channel to a depth of several hundred feet below sea level.

"Breakneck Ridge" - A Hymn for the Hudson Highlands

View from the eastern end of Bear Mountain Bridge