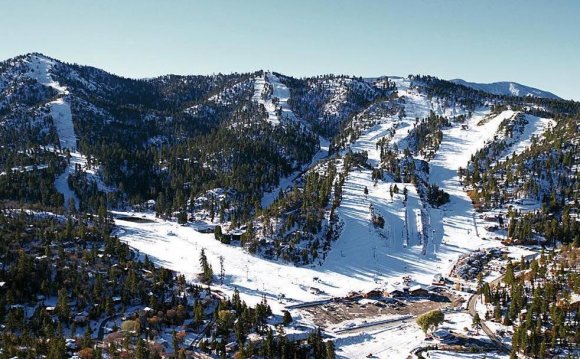 When it comes to the art of snowboard parks, it’s not an exaggeration to say that Bear Mountain is the most dedicated resort in North America and, probably, the world. It’s long graced the top 10 in our old Resort Poll rankings, including third in 2013 and 2014. This year, Bear topped our new data-driven Park Poll with the most park area and features of all the resorts that took part. Eighty-five percent of its 198 acres are covered in a whopping 174 rails, boxes, pyramids, hips, and jumps in a flowing layout that the park crew is constantly evolving. The new poll didn’t just look at acreage or feature count, either. It dove into how well a park is maintained and refreshed, which Bear excels at and is a big part of why it jumped to number one.

“We have a rail crew that’s out there five nights a week, changing things around, ” says Bear’s director of marketing, Clayton Shoemaker. “Maintenance is another thing that’s huge to us—day maintenance and night maintenance. We don’t let things get sloppy. Keeping that product 100-percent takes a huge commitment.”

That commitment starts pre-season when Shoemaker and crew walk the hill, looking at the lay of the slopes to see where they can improve the park, once the snow flies. From there, they head to the fabrication shop to start twisting metal into the kind of new, innovative jibs Bear is renown for.

From the ever-expanding, street-style Red Bull Plaza to techy transition features, Bear is built by snowboarders, for snowboarders, and it shows. From Christmas on, the setup is really firing, so get there and shred the endless lines for yourself.

HOLD IT DOWN at Bear Mountain, California — Snowboarding