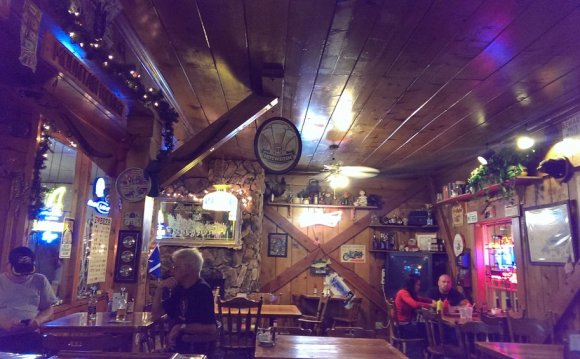 "Arrowhead's got the water ... Big Bear's got the beer!" That's the sentiment behind Big Bear Mountain Brewery, the small yellow house just off Big Bear Boulevard that's home to the mountain's only commercial brewing operation. Sure, pulling into the parking lot might make you think you're stopping over at someone's private residence for a beer. And sure, you're just as likely to find yourself sitting inside on a floral love seat as you are a barstool, but that's just the way Big Bear Mountain Brewery is. Cozy, quiet, unassuming; their beer is much the same.

Still, it's a fun atmosphere at Big Bear Mountain Brewery, with plenty of beer signs, old glass bottles and signed dollar bills tacked up to the wood paneling. There's a small piano in one corner, lots of old black and white photographs, and enough Americana to make you red white and blue in the face. In other words, it's classic Big Bear: woodsy and historical, with a fun sense of exactly its place in the universe. And with a chatty staff that will happily let you nose around all the kitsch, it's not a bad place to spend a Saturday afternoon, after a few hours in the snow or lakeside summer sun.

Nestled inside the Big Bear Lake town borders, Big Bear Mountain Brewery doesn't need much else to appeal to weekenders looking for a drink. Looming pine trees line the land surrounding the brewery, and the San Bernardino National Forest is only a window-glance away. Or, better yet, take in the cool summer breezes and fresh mountain air from the front porch of the brewery, waving to motorcyclists as the cruise by.

At more than 6, 000 feet above sea level and less than two hours from Los Angeles, getting away from daily headaches in Big Bear doesn't get much easier. Especially with a pint in your hand.

As for the beer, you can't expect too much. Even though they've been brewing on-site since the mid '90s, the small operation and lack of quality control can lead to some inconsistent beers. Even when the pours are perfect and the brewing seems to have been done with a great attention to detail, there's not much backbone to the brews on hand at Big Bear Mountain Brewery. The Grizzly, a dark and stormy chocolate porter, is the wintertime favorite for its slightly sweet aftertaste and warming effects. Come summer, most folks opt for the Old Miners Gold, a pale-colored honey blonde that is either too sugary or too flat, depending on the batch. Your best bet for a simple summer sip is the Tangerine Wheat, a cloudy, lightly tart affair that won't overwhelm you with fruitiness. If you're in the mood to try them all, tasters are available on wooden planks. Or, on Tuesdays, swing by for a $2 pint - at that price, you can afford to order the wrong thing a few times.

Big Bear Mountain Brewery also fills growlers, which certainly must make some of the locals happy. But for anyone looking to enjoy some high quality beer in Big Bear, it's better to stop off at Hangar 24 in Redlands to pick up a few six packs or a growler. Otherwise, it's up to the well-stocked liquor stores to keep you sauced while on vacation. For Big Bear Mountain Brewery, it's more about the experience and the atmosphere than the brews themselves.