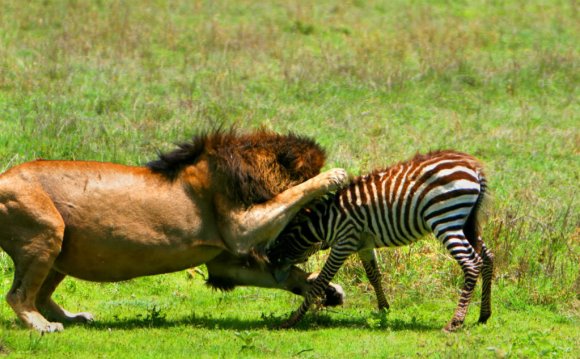 F96, nicknamed Frostbite because of the loss of parts of her ears and the tip of her tail during the winter of 2012-13, is a young female mountain lion followed as part of Panthera’s Teton Cougar Project. She dispersed from her mother’s home range in May of this year, when she was 20 months old. As snow drifts melted last Spring, she launched south into unknown territory. F96 successfully killed her first deer just 75 meters from a trail frequented by joggers and mountain bikers, and peacefully consumed it while concealed by tall sagebrush sufficient to hide her comings and goings.

But April showers and May flowers brought forth more than herbaceous growth—both grizzly and black bears emerged from winter slumbers in April of this year. Typically, the large male bears emerge first, followed by subadults, and then finally females with newborn cubs. Spring bears are hungry, some of which have lost near a third of their weight while in hibernation. Thus, Spring and early Summer foods—like animal carcasses—are essential to bears for recovering depleted reserves quickly, before the distractions and energy expenditures associated with the mating season.

F96 finished her first meal, and innocently wandered north, up and over the mountain. She began hunting the cooler, forested north slopes—forests carpeted in an explosion of new green vegetation. Perhaps she didn’t know at the time, but this was also where black bears linger in Spring, grazing lush new growth like cattle and keeping cool in the shade. F96’s next five deer kills were stolen by black bears, several within hours of when she made them. What was surely a huge loss for F96, was a real boon for bears.

Bear kleptoparasitism (kleptoparasitism is science-talk for “stealing food from another animal”) is ubiquitous wherever bears and mountain lions overlap in North America. In a Colorado study, we found that black bears visited 48% of deer and elk killed by cougars in summer, and in a California study, they visited an amazing 77% of deer killed by cougars (Elbroch et al. 2014). That’s a tremendous amount of interference by bears in cougars’ lives.

In both the CO and CA studies, cougars killed about 50% more animals each week in the “bear season” than the “no-bear season.” Our research showed that black bear kleptoparasitism likely increased cougar kill rates in two ways: first, mountain lions eat less of their kills when a bear shows up, and second, mountain lions kill their next prey more quickly when displaced by a bear at their last kill. So, when bears are around, cougars spend less time at kills, and less time between kills…both of which lead to more frequent killing of prey.

But higher mountain lion kill rates in summer are explained by more than just bear kleptoparasitism—cougars kill more prey in summer because 1) they hunt smaller prey in summer (like deer fawns and elk calves), 2) higher temperatures increase invertebrate activity (which voraciously consume dead animals, Ray et al. 2014), and 3) higher temperatures increase how quickly meat spoils (Bischoff-Mattson and Mattson 2009). One possibility is that cougars seek out smaller prey during the summer bear season to mitigate competition with black bears over carcass remains, just like cheetahs do in the presence of African lions (Hayward et al. 2006). In other words, cougars might hunt smaller prey so they can finish their meal rather than deal with the black bear(s) that inevitably shows up when there’s enough meat to attract their attention.

So…why don’t mountain lions defend their kills from bears? On occasion, they do. In one case in California, a large female mountain lion was displaced by an average-sized female black bear from a deer kill. The lion abandoned the site for 24 hours, but then looped back to confront the bear. What we found when we visited the kill a week later were the remains of the deer and bear, side by side. But our research has shown that this is the rare encounter. Typically mountain lions hear the approach of the bear, and don’t even stick around to spit and hiss. They just leave. Perhaps the risks of injury in a fight outweigh the loss of a meal.