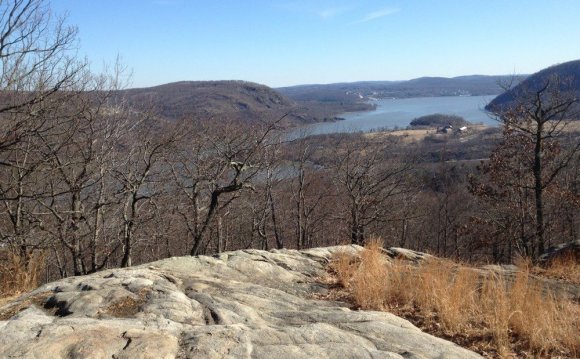 From the parking area, proceed across the lawn to the southwest corner of the Bear Mountain Inn and continue west (toward the mountain) on a paved path. About 400 feet beyond the Inn, you'll reach a junction of paved paths, marked by a trail sign. Bear right, following the white blazes of the Appalachian Trail (A.T.) as it leaves the paved path toward a stone building known as the Spider Hill House.

The A.T. climbs through an interesting section of large boulders before reaching a junction with a blue-blazed trail, which begins on the left. This blue-blazed trail heads back towards the Bear Mountain Inn, but you should bear right to continue along A.T. This portion of the A.T., opened on National Trails Day in 2010, was built over a five-year period by Trail Conference volunteers along with skilled and experienced professional trail builders. It was constructed to sustain the impact of the many thousands of feet that annually make their way up this popular route. More than 1, 000 individuals volunteered over 33, 000 hours of their time to construct this spectacular trail section.

The trail climbs on a series of 800 hand-hewn granite steps, supported in places by stone crib walls. After a steep, steady climb, the A.T. crosses a 28-foot-long wooden bridge and climbs to reach a beautiful viewpoint over Iona Island and the Hudson River.

The A.T. passes a seasonal waterfall (above to the right) and continues to climb more gradually to an area known as the "pine flats." Here, the trail turns right, rejoining the previous A.T. route, and climbs to the Scenic Drive. It turns right and reaches, in 150 feet, the dead-end turnaround of the driveable section of this road. The A.T. continues along the Scenic Drive for 0.3 mile, with views over the Hudson River through the trees to the right.

Watch carefully for a double blaze and sign for the "tower." Here, the A.T. turns left, leaving the road, and climbs rather steeply. After crossing the Scenic Drive, the grade moderates, and the trail soon levels off, passing through blueberry bushes and mountain laurel.

The A.T. recrosses the Scenic Drive, briefly parallels an old, rusty water pipe on a stone embankment, and climbs to the 1, 305-foot summit of Bear Mountain. At the summit, bear left to reach a panoramic viewpoint to the south and west over Dunderberg and West Mountains. After taking in the view, head to the stone tower – a memorial to George W. Perkins, Sr., first president of the Palisades Interstate Park Commission. If it is open, you can climb the tower, which offers historic exhibits and more views from the top.