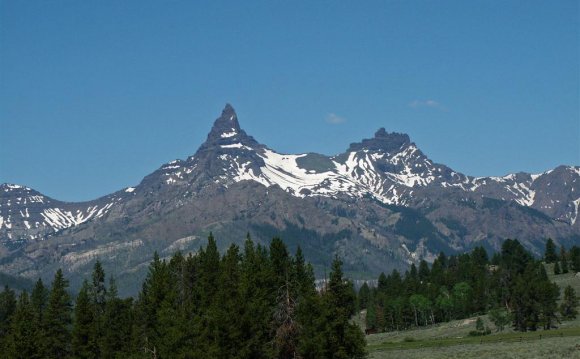 I can’t remember the exact moment I learned golden trout existed. I was in high school or college, had been fly-fishing for a number of years, and was quite familiar with rainbow, brown, brook, and cutthroat trout (the “big four, ” if you will). Discovering that I shared this continent with such a romantically named salmonid captivated me. I needed to catch one, hold it in my hands, and see this precious finned creature for myself.

I began researching golden trout, and I learned it was native to the Sierras in California. Goldens had also, however, been stocked in certain alpine lakes in the Wind River Mountains in Wyoming and the Beartooth Mountains in Montana. Adapted to cold, clean, high-elevation water, the alpine of the Northern Rockies provided a fine new home for goldens, and several wild populations took hold in the backcountry of the Winds and the Beartooths.

That you can’t find goldens in roadside rivers also titillated me. To catch a golden, you had to hike to them – you had to earn it. But it would be several more years before I finally danced with a golden.

In the summer of 2003, after my first year of law school, a good friend and I drove to the Winds from Chicago. We backpacked deep into the backcountry, and we struck gold. The fish were more exotic and beautiful than we had imagined.

Four years later, my girlfriend and I flew to the Winds in search of gold. Another backpack deep into the Winds, another gold strike. (We also left the Winds engaged. I popped the question after fishing for goldens all day, and, thanks to a case of altitude sickness, Sarah said yes, a double-gold-strike day.) Which brings me to August of this year. My younger brother, Dan, a teacher in Massachusetts, had endured my tales of golden conquests and wanted to see what all the fuss was about.

We arrived at the remote trailhead in the Beartooths on a Friday night, grilled some sausages over a fire, freaked each other out about grizzlies, and enjoyed some Moose Drool beer. Our planned route would involve a 17-mile hike up to the Beartooth Plateau and then a 5-mile off-trail traverse over an 11, 000-foot peak to our target lake.

Our hike on Day One was pretty mellow. We set up camp in a gorgeous meadow, fished a mountain stream, caught some rainbows, and, more importantly, caught up on each other’s lives. Dan and I are extremely close, and we talk almost daily. But the constant din of life and work limits us from immersing in the meandering conversations I so cherish. Alone in the Beartooths, nothing inhibited our wordful wandering.

Day Two took us to the plateau. Up high, at tree line, our peers were rock, craggy peaks, water, alpine grasses, a smattering of stunted trees, and thin air. It made us feel small and insignificant; I wish we could’ve bottled it.

We awoke to a frozen tent and fresh snow on the mountains around us on Day Three. Hot coffee and oatmeal were divine; washing our dishes and pumping water less so. We climbed through new snow to Chalice Peak – the fresh flakes made boulder-hopping with heavy packs slightly terrifying – and then we descended to the lake.

As golden lakes go, this one was nirvana. Big, gorgeous, tucked up against a wall of rock, and with a little outlet stream to a smaller lake below it. We set up camp, waited out a brief snowstorm, and went fishing.

We hit the tributary first. After seeing a nice fish rise in skinny water, I put on an ant I’d tied (which, to be truthful, artfully imitated a one-legged mouse), made a clumsy cast, and a large golden devoured it. A few seconds later, the largest golden of my life was at my feet. While trying to collect myself, I told Dan to cast upstream. He landed his first golden a few casts later. I then tried to explain to Dan it wasn’t supposed to be this easy.

We next hit the smaller lake, which turned out to be a full-blown aquarium for small gullible goldens. The fishing got pretty boring pretty quickly (though it boosted my perpetually low self-esteem as a fly-tier), so we moved up to the big lake.

There, the catching slowed. We resorted to slowly stripping weighted nymphs, and we caught a few nice goldens. We fished until a combination of low light and plummeting core body temperatures sent us scurrying to our camp and a fire.

The particulars of the final day are still a little hazy for me, as I’ve attempted to flush them from my memory for the past few weeks. The best I can remember, we bushwhacked down a stream for a few miles to a trail. It was thick, nasty, steep, tangled misery, and the fiasco took almost four hours to go a couple of miles. We wondered when, not if, the grizzly mauling would occur. (And when Dan flushed a black bear out of the brush in front of us, I thought he might bear-spray me just to relieve some stress from the ordeal.)

When we finally arrived at the trail, we celebrated as if the Cubs had just ended their 102-year drought, and then we huffed it to the trailhead. We drove back to Bozeman with the sense of contentment and calm one acquires only after days in real wilderness.

Dan flew back to Boston early the next morning, and we returned to our lives. Bent rod or not, we struck gold in the Beartooths.

How to climb Headwall - Beartooth Mountains