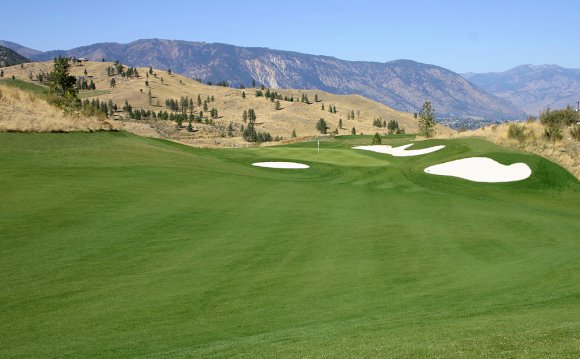 We're sitting in the sun on the rock-walled, timber-topped, screen-protected patio at Bear Mountain Ranch Golf Course near Lake Chelan (rhymes with Bataan), Wash. Below us is the 18th green and to the right is the ninth, a wedge away. Across from me is Von Smith, head pro and director of golf. Von is 54 and I have known him half his life.

We met in the mid-1980s when Smith was the pro at the Lake Chelan Municipal course. In 1994, he moved to the new Desert Canyon venue where he worked as head pro for 10 years. Desert Canyon was running into some financial difficulties, Bear Mountain was under construction and he was lured to his current position by Don Barth.

Barth was a partner in the Bear Mountain development at the time. In addition to owning Alta Lake Golf Course, the only 18-hole track in the largest county in the state, Barth is also the head man at the nine-hole Rock Island Golf Course south of Wenatchee.

Smith got his PGA apprentice status in 1973 and his Class A papers four years later. He was well-grounded in golf course operations, working with his father who, at age 42, became manager of the Rock Island facility. Von mowed the greens with a Toro walk-behind and did the fairways on a tractor pulling a five-gang reel set while still in high school.

Von has been married 30 years to his wife Cindi. While he manages the golf operations Bear Mountain Ranch, she has the food and beverage concession that fuels the golfers on the patio at the turn and after a round. "She works 10 times harder than I do, " said Von with a laugh.

I ask if Cindi is a good golfer. He suddenly turns serious. "If I could make half the putts she does inside 10 feet I'd be on the Tour." Cindi plays to a 10, while Von is a +1 or +2, depending on the day. Not only is it evident that he loves his wife, he is clearly still in love with her as well. The couple has a 24-year-old son, Ryan, who lives at Lake Tahoe. Each year they jump into Smith's Cessna 182 and fly down to see Ryan. "Flying is my passion, " he grins.

Each Monday in the spring, summer and fall the Central Washington chapter of the Pacific Northwest PGA holds a pro-am tournament somewhere in the region. A regular participant, Smith flies to some of the events. The professionals garner points based with their season-long scores. In 2006, Smith double-dipped, coming out of the season with awards not only for Player of the Year, but Senior Player of the Year as well. One does not quite have to pry this information out of the modest man, but I learned about it by accident. Von is not a man to blow his own horn, even though it contains a lot of hit tunes.

Bear Mountain Ranch, a development owned by Jerry and Mary Pat Scofield, includes a lot more than the golf course. Even while the course was under development Smith says he knew this was the place for him. Asked to identify the signature hole, he responds, "They all are."